JavaScript is a pretty unique and quite flexible language. As a result, it can sometimes feel magical - some things just work and you’re not quite sure why. Or maybe what you thought should work doesn’t and you find yourself doing some brute force debugging. This is by no means a comprehensive list, but they are some fundamentals that may give you more insight as to the inner workings of JS.

Scope can be broken up into two parts - lexical and in-memory.

You can think of lexical scope as the literal place in your code where you can validly access a variable. The example I’ll be using is from Anthony Alicea’s JavaScript: Understanding the Weird Parts. Let’s look at the example.

Every time you create a function in your code, everything between those function’s brackets is within a new scope. It may be easier to visualize it as follows:

If every color box represents a lexical scope - the light blue would be the global scope and the others are the local scopes (local to the functions). We can see that in Figure 2 even though b() was invoked within a(), its lexical scope does not overlap with that of a(), and as a result has no access to the ‘var example = 2’ created within a(). However, it does overlap with the blue box - the global scope - and so is able to access ‘var example = 1’.

What if, on the other hand, we had this?

Let’s keep working with the same example (I apologize ahead of time for the terrible drawings). I always imagine execution contexts as lock boxes that store our variables and keys that give us access to other boxes (execution contexts). If we don’t find what we’re looking for in one box, we can use the keys to search the other corresponding boxes. What keys are in a lock box and the order in which to use the keys is decided by the function’s lexical position. Every box contains at least one key, a key to the global scope. 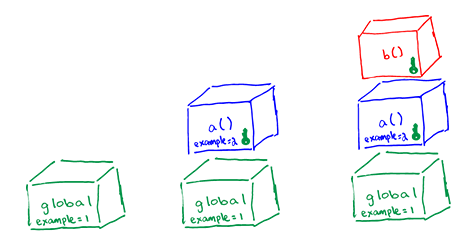 The execution stacks for each of these examples seem similiar, even though the lexical scopes are quite different. In fact, they result in two different values being logged. That’s why it is important to recognize that when speaking of scopes, there are actually two parts to it (lexical and in-memory).

Last, I’ll leave you with this as an introduction to closures. What gets logged?